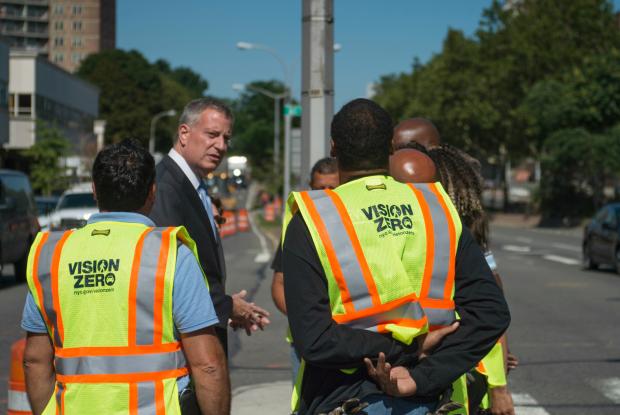 A recent article from DNAinfo examined NYC Department of Transportation data from 2013 through the first six months of 2017 and concluded that Mayor de Blasio’s Vision Zero initiative was serving pedestrians but failing cyclists. However, we find that conclusion simplistic. The mayor’s plan seems to be serving all users of city streets, though some categories of users are reaping greater benefits.

The big winners seem to be pedestrians, for whom the streets and intersections are substantially safer. Fatalities in this category declined from 184 in 2013 (the year before Vision Zero began) to a modern low of 139 in 2015, before ticking up slightly to 148 last year. The numbers are dramatically down in the first six months of 2017; after averaging 64 deaths in the first three years of the initiative, the total through this June 30 was only 48. Thus, 2017 could be another record low year for pedestrian deaths in New York.

Another group that has clearly benefited is motorcyclists, where fatalities dropped from 42 in pre-Vision Zero 2013 to only 19 last year. This is the only category where the number of deaths in any given year was less than 50 percent of the 2013 total.

Deaths among motor vehicle occupants have also declined steadily though not as precipitously as the other categories. The first six months of 2017 showed another decline, to 27 deaths, but the 2013 numbers remind us anything can happen in the last six months of a year. In 2017, there were only 23 motor vehicle occupant fatalities through June 30, but the total for the year was 61.

When discussing these totals, it’s important to remember that small numbers are subject to great fluctuation. That was the message Paul Steely White, executive director of the nonprofit advocacy group Transportation Alternatives, had for DNAinfo. The article correctly notes that cyclist deaths on the streets of New York City spiked from 12 to 20 in the first year of Vision Zero and has exceeded 12 deaths annually in subsequent years.

Why is this category of user not showing any benefit from Vision Zero? Perhaps because of a surge in the number of cyclists on New York City’s streets.

“Part of [the increase in cyclist fatalities] is the function of the enormous rise in cycling itself,” Mr. White said. “Looking at the crash rate or the fatality rate, we’re doing better, just because there are so many more people cycling.” However, he added, “That doesn’t diminish the urgency to make streets safer and expand bike lanes.”

Time will tell whether the city can absorb the increase in bicycle traffic and also keep cyclists safe.

If you have been injured in a motor vehicle accident in NYC, the experienced attorneys at [ln::firm_name] can help. To schedule a free consultation, call us at [ln::phone] or contact our firm online.